Red house: The Ballarat Construction Management building’s LED lights can be programmed and put on a show at night. Picture: Craig Townsend

Ballarat Construction Management has built itself a marvel

YOU’D be forgiven for thinking the new building at the Mt Pleasant end of Humffray Street is tied in with the next episode of the latest Star Wars trilogy.

The company and its architects Crosier Scott and Associates earned the people’s choice façade prize at the Architizer A+ awards, which will be presented in New York City on Thursday night.

BCM director David Moyle said they’d taken a chance on the building by asking the architects to go to extremes because his company would be doing the construction itself.

“We told them to to take building methods to their limitations and we will handle the construction element of it,” he said.

“There were very, very challenging times during the construction phase.”

“Fortunately we were doing it for ourselves, so the hard work was its own reward.”

Mr Moyle said the specially made glass particularly had been tough to install but their graft was well worth it, looking at the atrium-like entrance to the offices.

The building is up for more prizes in the coming months in Australia as well.

“The Architizer award is a fantastic achievement, especially as part of a process that got 1.6 million votes worldwide,” he said.

“It’s really really pleasing to be bringing an award like that to Ballarat.”

Other buildings to win in the New York-based company’s awards were the Porsche Cars North American headquarters, the Allianz Tower in Istanbul and some stunning private houses.

The project was in the works for a long time but the build itself took a relatively short seven months.

Mr Moyle said they had bought the site five years ago and started on concepts for the building three years ago.

It has already proved a hit in the neighbourhood.

“It’s like Christmas lights all year round,” he said.

“You ask people their favourite colour and put the LEDs on that.”

Mr Moyle said it was more than an advertisement for the company, that they were happy to build something “unique and special” to Ballarat, made for the most part with local materials and suppliers.

The building will be officially launched on Friday evening. 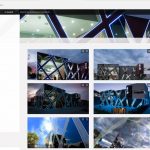