A two-storey office and warehouse in Ballarat is attracting attention from locals as well as being profiled on social media.

On a vacant corner site on the edge of town David Moyle, director of Ballarat Construction Management (BCM), was keen to create a statement.

“We have worked with David on a number of residential projects in places such as Ballarat and Geelong, as well as assisting him with his own family home, also in Ballarat,” says architect Alan Cubbon, director of Crosier Scott Architects.

“For this project, our brief was to show off the craftsmanship his company prides itself on.”

Located on Humffray Street, Ballarat, it has fulfilled the brief in attracting public attention.

The BCM “shingle” appears in the laser-cut pop-out COR-TEN panels that join Moyle’s office and from the unusual way striking in situ concrete features across the building’s facade.

The polished concrete beams that traverse the facade needed to be formed up on the ground and then carefully craned into position.

The architects also called on the services of a licensed surveyor to ensure that large glass panes, some measuring up to over seven metres in length, were millimetre-perfect in positioning.

In contrast to the light-filled atrium space in front, the rear elevation comprises the warehouse where building materials and machinery are stored.

This rear southern wing is also constructed in concrete, but includes concrete panels with a triangular protrusion to create an origami-like effect.

However, the front elevation and southern wing are beautifully cemented together (excuse the pun) via angular indentations to accommodate LED lights, changing at night to animate the site. “We used LED lighting in David’s home and he was keen for us to experiment with it for this project,” says Cubbon.

The reception area of the office space is located in a dramatic front-of-house two-storey-height void. At ground level are the administration offices together with the staff lunchroom and amenities.

On the first floor is the main open-plan office as well as the boardroom, the latter having a fully glazed wall to allow views into the void. “Our brief included generous natural light and using sustainable materials such as glass and concrete that could be easily recycled,” says Cubbon, who also used polished concrete on the foyer floor to absorb the sunlight and act as a heat bank.

However, the word “statement” was in Crosier Scott Architects’ mind when designing a foyer that would impress. It features a 3.5-metre-long reception bench made from Corian, with the same angular striations that appear in the building’s facade.

To add further texture, the architects included a timber-battened wall that extends over the two levels. And to allow the concrete treads of the stairs to “float”, they included a glass balustrade.

While the palette of materials is restrained, it has been thoughtfully crafted to create different effects depending on one’s vantage point. The concrete beams forming the atrium, for example, are smooth-faced, while those on the exterior are highly polished. On the building’s northern facade, the angular steel member provides another layer extending past the roof line.

“It was a challenging project. It wasn’t just a branding exercise to create attention. The building primarily had to function as an office and warehouse and importantly, enable staff to enjoy working here,” says Cubbon. 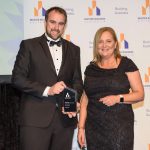